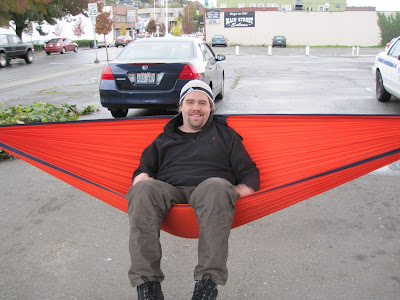 So, I still can't help but feel this is the wrong season to get a hammock.  I don't see myself setting it up for camping purposes in a little while, but I think it will be nice once the summer rolls around again.  I also have a hanging kit for it that can help get it up between two trees without tying any knots or anything.

So, now all I need is a nice summer-like day to put it up and spend some time relaxing between a couple of trees.

In other news, I've determined that getting a "Not-a-Snuggie" blanket with sleeves on it was a good idea.  The weather is getting colder, and it's really nice to have a warm blanket with sleeves to keep the cold away.  Jaani and I have been laying on the couch watching TV today, and the it just seems like as much as the heater runs, it just doesn't warm up very much in here.

Oh, on a note that isn't about me... apparently Eric is on a small island along the coast of Belize, where he had a front row seat to hurricane Richard (which is now a tropical depression.)  I am not sure what ended up happening because I haven't seen Eric online today, but he said the weather was pretty crazy the other day.  I'll get back to the updates about Eric as soon as I hear more, but I'm sure he will be fine.

anyway, that's all for now.

SteveO
Posted by imthefrizzlefry at 10/25/2010 09:08:00 PM
Email ThisBlogThis!Share to TwitterShare to FacebookShare to Pinterest

Getting my workstation back into place... 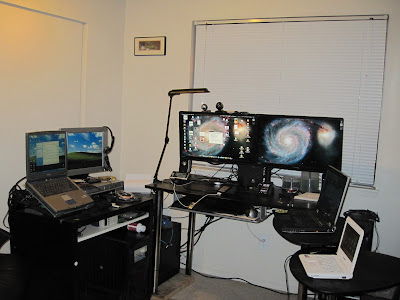 So, Eric went on his trip to Central America, which you can follow on his blog, and that means I get my office back.  So, I know what you're thinking... you're thinking "Hey Steve, isn't that a Windows computer on the left?"  Well, yea, it is... but I have an excuse!  You see, I took it out from the bowels of the black hole I call a closet so I could help a friend of mine test his software (which only runs in... or rather he only wants to provide support for Windows...) So, yea, I have a Windows PC hanging around... Actually, behind the laptop and netbook on the right, I have 4 more Windows PCs that I am currently working on for somebody...  So, Microsoft has managed to infiltrate my home... kinda.

That being said, I am happy to say that between my desktop, 2 laptops, netbook, cell phone, ipod, and Internet Tablet (all present in the picture) only one device runs an OS that is not deeply rooted in Unix.  (that being the Windows laptop...)

Soon, I'll actually make things a little more interesting when I put Android on my Ipod Touch, but that will come later.

Anyway, so, I've got a little more to get done as far as setting my workstation up.  I still have to wire the network for that room, because even though my computers all have wireless adapters in them, the computers I'm working on don't.  Which means I need to bridge my wireless network to make a local network for the repair portion of the work area.  I also need to work on my electronics area, and I think I will need to get another table for all that stuff.  Well... I'm sure I'll come up with something interesting.

So, to say the least, I have a few things on my mind while I'm working on this, but with a little luck, I'll be up and running some time tomorrow before noon;  However, for the rest of the night, I have some updates that need to be run on that Windows PC, and my netbook is still running Ubuntu 10.04... so I'll have to update that to 10.10 tonight (which could take a couple hours because the network is currently running a little slow in this end of the house.

Oh yea, in other news, I also ordered my last dual band WiFi N adapter, which means that this is the weekend I make the switch from 2.4Ghz 802.11G networking to 5Ghz 802.11N networking... that will get me less interference from my neighbors' networks, a stronger signal in my office, and 300Mbps WiFi (rather than a mere 54Mbps...)

So, that's my plan.  I hope yours is just as exciting.

SteveO
Posted by imthefrizzlefry at 10/22/2010 11:03:00 PM
Email ThisBlogThis!Share to TwitterShare to FacebookShare to Pinterest

One hell of a burger! 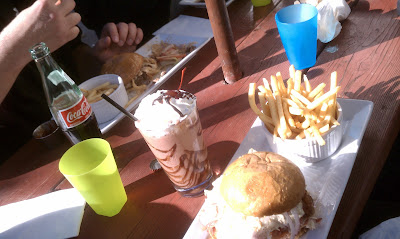 So, I stopped by the Lunch box Laboratory today in Ballard... oh boy, that was good food, but I don't think I'll need to eat again for a week.

The beautiful burger you are looking at there is the hothead. It's 1/2lb of super beef (prime rib, sirloin, and chuck beef), 1/2lb bacon, pepper jack cheese, and jalapeño ranch sauce. I got it with garlic fries and a chocolate covered strawberry shake.

I'll tell you, I've never had a burger quite like this. It cost me $21! I know, it sounds crazy, but they are only open for four hours a day, and they closed 2 hours early today because they sold out. When you get there, you have to wait in line, but once you order, they are quick to get your food out. Every day, 300 people have a chance to enjoy one of their sandwiches, and if you don't see one on the menu that has what you want, then you can make your own... just choose your meat (lamb, chicken, or beef), choose your toppings (and there are a ton), then if you want a side (which they have quite a few of those too) and a drink... if you want more than just water.

Normally, I wouldn't write about a stupid sandwich, but this one is really special. If you visit Seattle, it is something you need to try.

SteveO
Posted by imthefrizzlefry at 10/17/2010 06:03:00 PM
Email ThisBlogThis!Share to TwitterShare to FacebookShare to Pinterest

So, in anticipation of Hulu Plus on Roku, I've gone ahead and purchased the latest and greatest Roku XD|S Player.  So, what is the difference?  Well, aside from the size and 3 extra buttons on the remote; it's capable of 1080p playback, supports 802.11N WiFi, and it has a USB port for music and video playback (with a firmware update coming in November 2010).  One other change they made was the removal of S-Video and Component plugs on the back, but apparently they have a component video adapter that is sold separately.

Besides, I found someone who is interested in purchasing my old one, so... why not?

If you didn't already know, I love my Roku Player, which is the best way to watch Netflix on your TV.  In addition to Netflix it has the ability to stream video from many independent video sources.  My favorites are YouTube, Revision 3, and Mediafly (which is an online podcast service... so you can basically create your own channels by combining podcasts you like.)  It also supports Amazon Video on Demand, but I really don't like paying per video.  I guess the content isn't really worth that much to me.  Besides, when I can watch unlimited Netflix for $21 (which also includes 3 DVD/Blu-Ray discs at a time)... and if Hulu Plus stacks up to be worth it's $10 monthly fee, then I'll be happy as can be.  And, I can get rid of my Cable bill... which I pay $10 a month for just to get HD...  Plus the Basic cable fee...

Anyway, I'm excited to really put this thing to the test.  I'll be running some side by side comparisons on my dual (1080p 24inch) PC monitors, which might be a waste of time, but I want to try it anyway!

The one thing that I am a little disappointed with though... no DLNA (Digital Living Network Alliance) support :(  For those of you don't know about DLNA, it's this standard which is pretty much being implemented by everything form your Network Attached Storage devices and home routers to gaming consoles and mobile phones... It lest you stream Video from one device to another.  The best part is that your computer already does it.  It doesn't matter if you use Windows or Linux or Mac.  I even have a router with a USB port for attaching a USB hard drive, and the router will stream video via DLNA to my Xbox or Cell Phone.  If Roku added DLNA support, I would have no complaints about the device.  My fingers are crossed that the November update will include DLNA support, but I haven't ready anything from Roku to confirmed that.

Until I really play with the devices a bit more, I'll leave you with this slideshow: