So, among the plethora of missed opportunities that arose for the wise investor (like investing in 3B, Clorox, Moderna, Zoom., etc...)  I found another stock that would have been great to buy in March: Logitech.  Everywhere you look, all their webcams are sold out.  It actually got me to thinking about my own webcams that I've bought over the years... 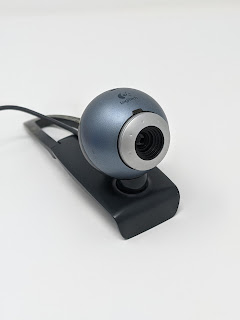 In the early days of this blog, I had and old Logitech Quickcam.  I say old, but I have the thing I went digging in the garage and I found it.  You can see here the photo that I dutifully took in my photobox (affiliate link at the bottom...)

I tried digging for any of the old webcam photos or timelapse videos I used to have, but I can't find anything.  Maybe I'll loop back around and fill in more details.

It was an okay camera at the time, but the photos are complete garbage by today's standards.  I had some trouble with it because I think the USB cable is going bad after all this time 20+ years, 12 of which have been in a box wrapped up in a ball. 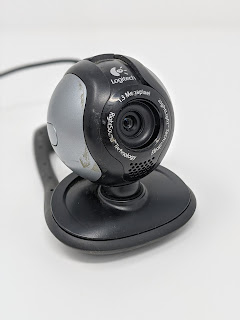 The next camera I managed to dig out of storage is a Logitech QuickCam S5500 (I think?)  As it turns out, Logitech doesn't put labels on these things, so I am just going by what my computer thinks it's called.

This is a better camera.  It has a higher resolution and a built in privacy guard that slides down over the camera sensor.  Honestly, it's about as good as the built in webcam in most laptops.  However, it's still pretty lame compared to more moden webcam.

I think I got this camera 12 or 13 years ago.  I replaced the QuickCam with it, and I continued to make timelapse videos out my window and save still images on a schedule with the program motion.  I just verified that it is still available in Ubuntu's repository too... good old apt install motion, and you are on your way.

It's funny to think that back then, I would save a still photo into a folder every second.  Those photos were stitched into a 14-hour timelapse, and every 5 seconds, the image was copied into a folder synchronized to dropbox and shared publicly.  Then I had a simple javascript utility that would refresh the 5 most recent right here on this blog.  ahh, those were some interesting days of manually writing HTML and XML documents to generate my resume with XSLT. 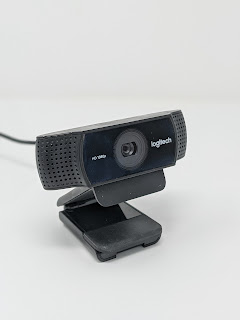 Finally, these days, I have a Logitech C922 on my computer.  I actually had a C920 at one point, and I got the corporate/lync/skype certified C930e for my Mom when she threw a baby shower for Renmin and I.  This form factor was used with a number of webcams.  This one supports 1080P video, and the corporate one has the same sensor, but a wider angle lense.  I also had one that was nearly identical to this camera, but it only supported 720P.

It's a pretty good camera, and in addition to video quality, the audio quality of the stereo microphones is pretty good too.  Some people have even told me it's better than my Plantronics headset, but I tend to use my Bose QC35+ headset during video calls, and people tell me that sounds great!

So I didn't just want to show you the cameras, I also setup a little photo shoot to compare them...

The QuickCam has low resolution, has trouble dealing with the brightness of the lightbox, and you need to manually focus by turning the ring around the lense.  I also had trouble because I think the cable is going bad, and most photos I took turned out blurry even though I had the camera on a tripod.

The QuickCam S5500 is a little better.  It actually has auto focus, and it had no trouble dealing with the bright lights in the lightbox.  You can even see the angle is wide enough to get the back corner of the box.  The two QuickCam models are actually in about the same spot, so you can see how much wider the angle is on the S5500.

Next, I get to a more modern webcam.  Now, this camera has such a wide angle compared to the other two, that I had to move the camera in closer, and I still couldn't get rid of the back corners.


I guess just for good measure, I'll add a photo from my phone...

It really is amazing to look at how far digital cameras have come in the past 20 years.  I remember in 2000 it has a huge deal when we had a digital camera that saved BMP images is a 1.4MB floppd disk.  It was so cool that we could just carry around this "small" 3.5" disk and save a few pictures on it.

Now I'm not happy if a camera doesn't support 4K video or HDR.  How times have changed.


Anyway, It's time for me to get some sleep, so Goodnight...

Posted by imthefrizzlefry at 5/23/2020 02:24:00 AM
Email ThisBlogThis!Share to TwitterShare to FacebookShare to Pinterest

Virtual Interview Difficulties, and my plan to make it better.

Hey, so I guess I have had some trouble getting back into the idea of blogging.  Maybe I can make a recovery and not just rant about politics, but I don't know...

I've had a lot of stress in my life recently with: my boss retaliating against me for the crime of having a child; then being forced to work for the county for 6 months under the threat of paying over $25,000 if a quit (a type of debt slavery); then finally being able to quit, but dealing with my offer being retracted everyone stopped hiring because of this virus.  If not for my totally awesome family and that COVID stimulus check, I would be totally screwed right now (instead I still have a fleeting hope of making through this in one piece while my wife works).  Anyway, enough about me, I made my bed, I can work it out.

It wasn't all bad though.  I went through a round of interviews for Google.  It was an Software Engineer - Engineering Productivity interview (SWE-EngProd).  I was super excited by the idea of what I could do at the job, but unfortunately, I didn't make it through the hiring committee.  This is the second time I have made it this far in a Google Interview, but this time I really had a hard time with the virtual online interviews.  My excuse is the lack of a white board.Which has got me thinking about my next interview.  So... I got an idea...  If I practice like this: 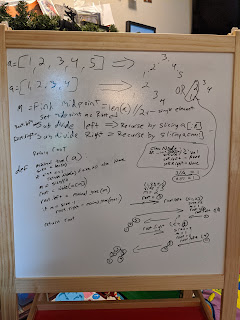 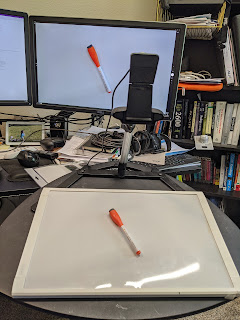 I don't know, maybe it's crazy to think like that ;P.

Regardless, I have an Amazon interview coming up, and I have been working on how I could do camera switching with Chime, and I came up with this idea.

I had purchased that overhead camera a while ago on Amazon just to see if this might work.  At the time I was thinking about creating an online YouTube class, and all the MOOCs I saw on Coursera and Udacity featured a video of a hand drawing on a white board.  So, I thought, why can't I do that?  I explain crap all the time to people.  So I bought it.

Now, the camera mount I got isn't available anymore, but the identical item can still be purchased under a different name.  Here is an affiliate link if you think you want to buy one of these:(I.E. I get paid if you click the link and buy one.)  Anyway, here are links to the "Photo Copy Stand" and the webcam I have connected to it:


Full disclosure, I used a cheap little dry erase board I had laying around, but I did just buy a 48"x36" magnetic dry erase board for the back of my office door, and it works great with those magnetic dry erase markers.  I am normally an expo marker person, but the Amazon bookstore in the mall had those in the checkout isle, so I grabbed it while getting something else.

I also used those cool little 2040 Design Studio Pugoo pads, where are these awesome sticky pads that I use as a non-permanent adhesive, but it looks like that company doesn't exist anymore.  So, I can't shill for them too.  That's right people, I am selling out by putting an advertisement on my blog. What else will unemployment drive me to do?

I promise not to go too crazy with the advertising, but I think the context here works, so I'm going to do it.  Oh, about that $165 webcam, that price is inflated due to COVID.  Normally, that's a $70 webcam, but because everyone is working from home, laptop webcams suck, and most people don't like the new $200+ webcams, this older but still pretty good webcam is in much higher demand that normal.  So, unless you are desperate, wait for Logitech to pick up production again.

ok, so, I'm trying my hand at being a corporate shill, but at least I'm promoting some things I actually use... I think saying that will help me sleep at night.  Other than that, the family is doing good.  We still have the house, and I'm still interviewing for work, and that's about it for now.

SteveO
Posted by imthefrizzlefry at 5/22/2020 01:58:00 PM
Email ThisBlogThis!Share to TwitterShare to FacebookShare to Pinterest

So, many of you may have heard about the recent Vice documentary Bernie Blackout.  I recently saw it, and I have to say it's nice to know other people noticed the same thing as me.  I think they sum it up best with this one chart I grabbed from the show:

I think it's really telling that every single time one of the news networks started talking about Bernie, it was phrased in a negative light.  For example, all candidates had about 2% of their supporters talk negatively about others online, but because Bernie had more supporters than all others combined, this lead to the invention of a false "Bernie Bro" narrative.  If he won a state, then it was somehow the smallest win in history.  They call this the Carl Rove strategy in the documentary, and I guess so, I don't really know to be honest.

However, Biden didn't really win.  He was propped up by every other candidate that dropped out as well as the media narrative.  It's the same thing that happened with Hillary in 2016.  Bernie was filling stadiums with people he would bring to the Democratic Party; not the anti-Trump crowd that would vote Democrat no matter what, but people who have lost hope in our political system and would have voted for someone who actually believes what they are saying.  Those who are disenfranchised by people like Hillary and Biden.  The people who the Democratic Party doesn't care about.  People who actually believe in democracy.

Overall, I liked the documentary, and I think you should hop on over to Vice and watch it.  I felt that sort of tightness in your chest when someone is preaching to the choir of a repressed group; you know, it just kept tugging on my heart strings.  It pointed out a lot of things I felt were obvious.  Like the fact that people supported Bernie because he was promoting what they believed, not some evil old man putting ideas in their head.  It's why Hillary lost in 2016, and it's why I think Biden lost on April 9th.  Not because Bernie didn't support Biden, but because Biden (Hillary 2.0) doesn't stand for anything.

So, this is where I lose faith in our system again.  The same thing happened in 2016.  I had hopes for a candidate that would actually believe the purpose of government is to serve the people which is represents, but then we ended up with a choice between a douche and a turd sandwich.

Anyway... I guess that's my rant for now.