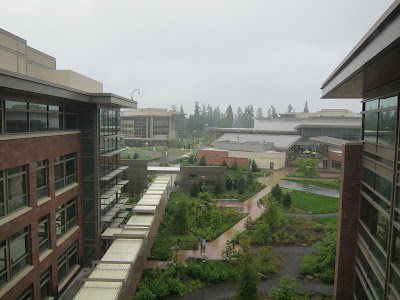 SteveO
Posted by imthefrizzlefry at 6/20/2011 07:27:00 PM
Email ThisBlogThis!Share to TwitterShare to FacebookShare to Pinterest 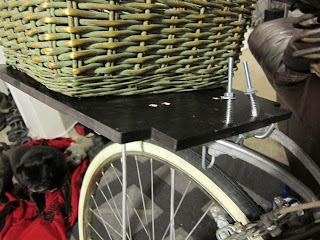 So, I have a little update on the mounting mechanism for the Jaani basket project.  Because I have waged a war on zip ties (those who I work with would understand this ...  I decided I didn't like the zip tie solution. 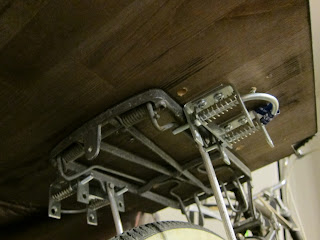 Also, that solution was a little too permanently attached.  To remedy the solution, I went down to Home Depot (it made me think of dad...)  and I got 2 U bolts, 6 compression screws, a couple of washers, and my father was kind enough to donate a handful of little L-brackets to my tool set when I left Michigan...  Thanks Dad! 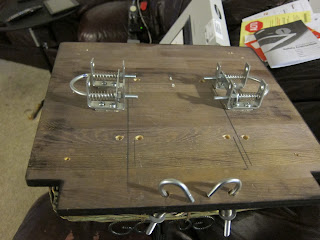 So, the entire thing hold the basket on to the back of the bike pretty well.  I think I will get some of that rubber grippy stuff just to prevent it from sliding and to eliminate a rattling sound that it makes when I ride around, but I think it will make the basket much more practical...

also, wicker baskets are not that aerodynamic, and the entire way home from Renton, I thought the basket was going to rip off of the bike...

So, now I can take it off and put it in my car.

So, that's my latest story, and I'm stickin to it for now.

SteveO
Posted by imthefrizzlefry at 6/14/2011 09:21:00 PM
Email ThisBlogThis!Share to TwitterShare to FacebookShare to Pinterest 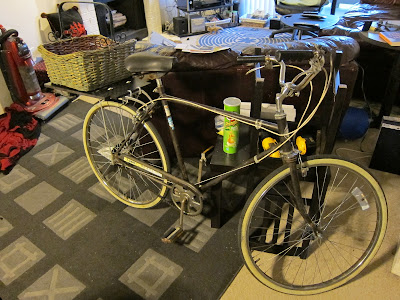 So, after a little bit of work I finalized Jaani's Basket... I guess because I haven't written about this on the blog yet, I might want to explain...  You see, I haven't been riding my bike around much because I don't like leaving Jaani all alone inside on nice sunny day... so, a while ago, I got a trailer for him, but I hated having to set it up and then I had to make turns really wide, so I couldn't ride around town... anyway... the solution was to get a bike rack, and put a basket on it.  However, my old bike (which is a really nice fancy racing bike) does not have a way to mount a bike rack... so, I went looking for a solution, and I found one. 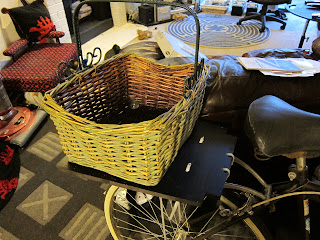 My friend Paul down at Jet City has a hobby of selling old bikes, and he found an old Sears Roebuck and Co 3 speed cruiser with a bike rack on it.  When I saw it, I knew it was a pretty cool bike.  Also, Debbie had a basket that she was kind enough to let Jaani use.  At first, I just used the rat-trap on the bike rack to hold the basket in place, but I wanted something a little more permanent.  So, I took a stroll down to the Ikea as-is section, and I found a chair seat that was just about the rite size for the basket...  I drilled four holes in it to screw the basket down, and then drilled six more holes to fasten the seat to the back rack.  For now, I'm using Zip ties, but I will eventually move to something that is easier to remove and replace. 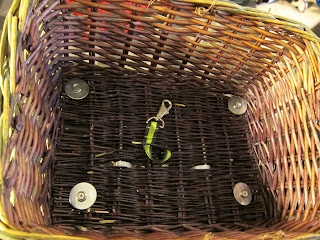 Another think that I had to do was make sure that Jaani was properly secured in his basket.  Truth be told, he jumped out once (luckily in a grassy field), and I didn't want to find out if he would try and do it again.  So, I cut the end off of an old leash and screwed that into the board in a way that would prevent Jaani from being able to jump out of the basket... Actually, he can hardly get 1 leg out.  I have a blanket that I put in the basket around the leash.  That way he has a nice area to lay down and relax.

So, at this point, I only had one more unresolved issue, and that was the fact that the bicycle would not fit in my car.  So, I had to get a bike rack for my car, and now I can transport my bicycle around without a problem.  I was thinking about it, without a van it is hard to transport bicycles, and it is rare that I would want to go somewhere to ride my mountain bike alone... so, I needed a way to transport multiple bikes at the same time... an issue I have actually run into several times... so, I was easily able to come up with several reasons to get a bike rack other than just the new bike.  So, I am now the proud owner of a 3 speed bicycle that I can carry Jaani on and a bike rack to transport it around with.

It's a great thing.  So, there is an update for the time being.  I should start updating more once my break begins, but I guess only time will tell for sure.