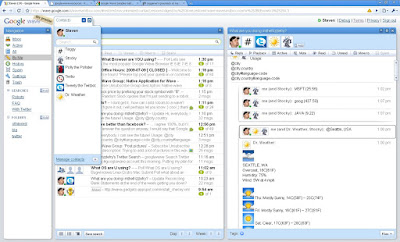 So, I got an invite to the Google Wave Developer preview, and it's pretty cool.  It looks right on track for a beta at the end of September.

It was a little funny at first because you just get this information overload right away.  Everything everyone was talking about flooded my inbox.  This was because of a special dev channel that you can subscribe to right when you sign up for your developer account.  Basically it's a constant stream of what the devs think is important to get done.  There is a lot going on.  Linking Wave to Google's App engine works pretty nice, and you can get a lot done with robots.

So, dealing with the information overload lead me to use the search box a lot.  There was no way for me to read all the waves, they all just kept going.  Each wave would have a dozen or so people doing all sorts of things.  One wave was a group of people collaboratively creating a book, and another wave was a list of robots.  The most common waves I found were titled "test"  because that was what the channel was for.  Testing stuff that you are writing for Wave.

Once you get used to the information just streaming in from everywhere, you start to like it.  You can search for anything you want, and real time results of waves on your channels start flowing in.  You can reply to waves, play games of chess, and even add hot spots to a map.  The conversation really just flows smoothly.

Now that I'm getting in my groove, I started to wonder what kinds of cool stuff I can do with Wave.  I started looking for bots, and the robot wave just popped right up.  I saw the Twitter bot, Tweety the Twitbot, and then added the email address (tweety-wave@appspot.com) to my contact list.  The whole process to this point was just like any other bot (like smarterchild on AIM...)  Now I can start a wave, and include tweety.  From then on, anything you say in the Wave will end up on twitter.  So it's important not to use multiple bots in one wave... like I just did... you end up tweeting things like $MSFT... anyway, that tweet was supposed to be a wave for Stocky (stocky-wave@appspot.com) who actually changes the text you enter into a stock quote (like you type "$MSFT" and Stocky changes it to this "MSFT (25.56)".)

The bots are awesome!  You can embed pictures, maps, surveys, polls, real time weather, HTML, and all sorts of stuff into a Wave. 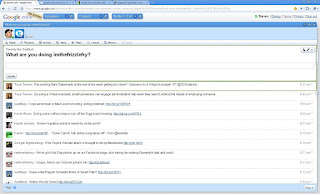 Another cool thing I noticed right away is that everything can be minimized.  With the announcement of the Google Chrome OS, I can see Wave as evolving into some sort of live desktop.  You can have multiple waves open at once, and just switch between them.  The full screen reading mode will also be pretty nice for my netbook.

In final, my first impression is that Google Wave will revolutionize the way people communicate on the web.  Everything is so easy to do.  Want the weather?  tell the weather robot where you want the weather for.  Stocks? Directions?  Microblogging?  Actually that makes me think, how will this effect twitter?  You have real time search, and a more interactive way to communicate with your friends!

Anyway.  I was really excited about Wave before, and now that I've gotten a taste of it, I don't think I can stop.

I'll have more on this, but I'll have it on the tech blog.