What the heck is this thing? 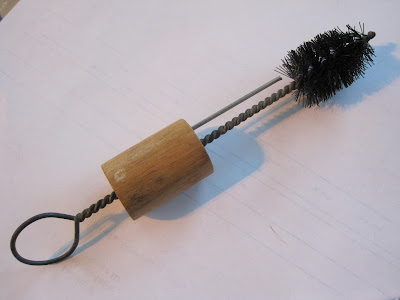 So, I was down at Jet City today, and my friend told me about this thing he found. He said he couldn't tell what it was when he found it, and he wanted to see if I would know what it was when I saw it.

So, I picked it up and played with it. It's a wire brush with a wooden cylinder on it. The small metal pin sticks out, and you can spin the metal cylinder around on the handle.

My first guess was a self cleaning pipe brush, but some how (even as I was saying it) I absolutely knew that wasn't what this thing is. So, do you have a guess?

If you want another hint, I have a second picture that includes an additional clue: