it appears that picasa 3 for linux isn't all it should be? maybe... 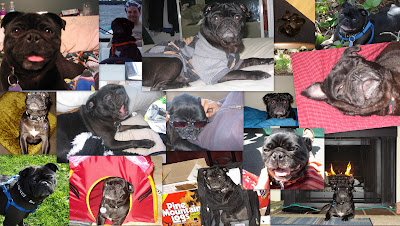 So, when I tried to post a picture to blogger with picasa 3 running on ubuntu... the picture didn't get uploaded.

that's really unfortunate because I thought the picture went up... I even had to wait for the picture to upload, but oh well...

So, I'll have another post (hopefully tonight) where I update the picture in the post from 3 days ago. (it will show up down below.)  For now, enjoy this collage I put together of pictures of Jaani

So... that brings me back to today. Another day at work. I was really happy because we were talking about new features in a meeting, and let's just say that the next version of the Zune software will blow itunes out of the water.

Then I actually used a ternary operator in my code today... which is only significant because I have only previously done that in school projects. So, I was excited about that.

Then, I went on to create a list of test cases I would like to get automated by the end of the week (aka EOD tomorrow)... which probably won't happen, but that will give me the anxiety of feeling behind next week (instead of ahead) which will get me working faster.

I'm excited about GTAC on Thursday/Friday! For those of you who haven't heard, GTAC stands for Google Test Automation Conference. It makes me really happy to actually get more exposure to the community of testers in the Seattle area without the pressure of having a task I'm trying to get done. In other words, a good (real world) social networking event for me.

I still don't know what will be in store for the rest of the week, but my manager is leaving to visit family in India tomorrow, and he seems happy with the progress we've made so far on our task... I guess only time will tell.

that's it for now.