The Story of Jaani 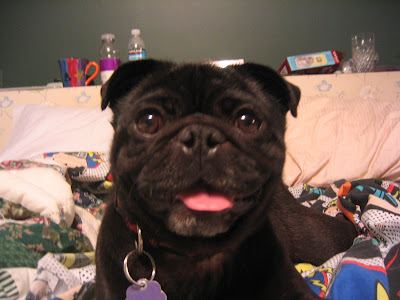 So, I was thinking that I don't say enough about my little buddy Jaani, and how he came to be my Pug.  When I found him, I was living in Michigan, and my girlfriend and I were staying with my parents.  She was really bored in Michigan, and said she wanted a dog.  So, we went to a few pet shops and saw all these $300+ dogs and I thought that was way too much money.  Plus I don't like the idea of supporting puppy mills either.  I suggested why don't we pay a visit to the Humane Society, and see what they have.

We found the closest Humane Society and went over to to see what kinds of dogs they had.  We didn't find much in terms of dogs, but they had a ton of cats (I wasn't about to go down that road again.)  The lady there said they get most of their dogs from the Genesee County Animal Control.  The next day we set out to see what animals they had there, but none of the dogs they had up for adoption were right.  However, they had 7 other wards, where they put dogs for a week before they can put them up for adoption.  We took a stroll to see all the other dogs, but none of them seemed right either.

We found that it was actually a lot of fun to go through and feed all the dogs treats, and play with the ones that weren't totally freaked out and scared (so they would probably bite.)  I figured that was probably all the excitement and joy those dogs would get in there.  My first choice was a dog that I never actually thought I would get.  I nick-named him grouch, because as soon as you entered the room he would start growling and snarling at you.  He was a German Shepherd, and he looked kinda old.  When he started to bark and growl at me, I just crouched down next to him and told him to be quiet.  It didn't work right away, but when he saw I was comfortable with him, I gave him a treat, and he never barked at me again.  I guess I formed a bond with him, and he would let me pet him through the cage and scratch behind his ears.  He seemed like he would be a great dog, but I knew he was probably destined to be put down.

After going up there a few times, we saw a little black Pug in the new arrivals ward.  He looked so scared and lonely.  He was really thin and looked like he had been through some hard times.  At first, he was afraid to approach the door, and just curled up in a little ball with his head buried in the corner of the cage where there was a blanket for him to lay on.  Instantly I knew I wanted him, and it was easy for me to persuade my girlfriend to agree.

After that, we went up there every day, and went directly to his cage.  Sometimes I got a little lost because they don't keep the dogs in the same cage for long, but I would always find him.  He quickly grew attached to me, and after the second day he started to cry every time I walked away from the cage.  I started to fear that someone might come and claim him before he went up for adoption. 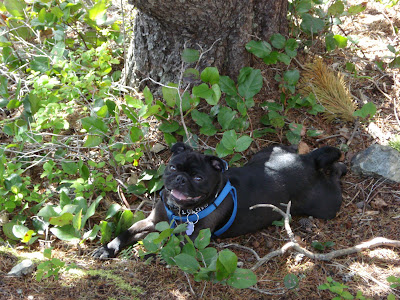 After a week, it was confirmed that he was going up for adoption, and we waited until they closed that day to leave;  just in case someone would try and take him home.  That night was the longest night ever. At around 10PM we went back up to Animal Control, because they had a policy that the first person in the parking lot gets the first choice, and I wasn't about to risk it.  The thermometer in the car said it was -10 degrees on that cold January night.  It was hard to sleep in the car, and we were starting to think four blankets and the excess heat I generate wasn't enough.

Around 4:30AM someone came up and knocked on the window.  I woke up and half expected to see a cop telling us we have to leave,  but it was an older lady who asked if we were there for the pug;  I replied yes.  She said it was amazing that we camped out all night for the dog, and she thought that he must be going to a good home.  I like to think she was right.

Finally, 8AM came and we went up to the door and waited for the lady to come up and unlock it.  Several other people were there as well, and another person got angry because they were first through the door and really wanted that pug.  However, because we were the first in the parking lot, the dog was mine fair and square.  So, a few people left right away, and a couple people stuck around just to make sure we actually walked out the door with the dog.  There must have been over a dozen other people there who came for that dog, many of them got to the parking lot around 3 and 4 AM.

The lady brought Jaani out.  He was soaking wet, cold, and developed kennel cough from the bath they gave him that morning.  He saw me right away, and as soon as the lady put him down, he ran right over.  He was so excited to leave that dingy old cage, and I was excited to have a new little buddy.

As time went on, my girlfriend lost interest in the little guy.  He liked me too much, and was always sad until I came home.  Eventually, we moved back to Washington and broke up;  I didn't want to let him go, and when I told her that, she started hating him.  Everything he did was bad.  I have to admit, the little man is far from perfect, but I didn't adopt him to see if I would like him.  I adopted him to make him family (period.)

Now, the little man can be a bit of a burden, and he required a significant amount of my time and attention.  He is like a half-child; in that he is like a baby that never grows up.  I have trouble going anywhere without him, and I can't sit down on my couch without him at least coming over to either lay next to me or on my lap. 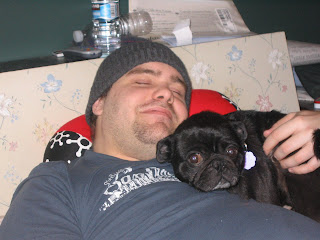 I guess I'm luck to have him.  He gets me out to exercise every day, and he is great with the ladies.  Actually, he is great with just about everyone, except people with work boots... skateboards... motorcycles... and a few other things that either show large amounts of aggression or make loud noises.  It's not his fault, he just gets scared.  I guess there was also that indecent with Mellow (my friend's cat,)  but I think with a little more work he won't chase cats anymore.

So, for those of you who haven't heard, that's the story of Jaani.  My little buddy.