Cannon Powershot broken... oops... And I got an HTC Incredible! 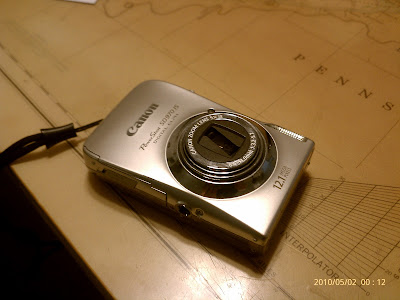 So, I was so excited about my new phone that I wanted to take a picture of it, but then I got a shock.  My totally awesome Cannon PowerShot is broken! Well, not permanently, but for the time being I'll just have to let it sit until I can pay to fix it. I guess what happened was I must have hit the power button while it was in the case... which is apparently a common problem with this camera.  You see, this particular model has a higher zoom than the standard powershot, and it turns out that because of the mechanics the motor has too much torque for the sensor that tells the camera to stop moving the lense.  So, it knocked the lens off the track;  The worst part is that this particular issue is very common, but not covered by the warranty.  So, I'll either have to actually pay money to get it fixed, or learn more about how these things are built so I can fix it myself.  I don't know which will become a viable option first.

So I recently obtained a Droid Incredible (as a birthday gift!  Thanks Mom!), and now that I've had enough time to use everything that came with the phone and push all the buttons, I want to say a little bit about it.  I'm pretty much just going to talk about the turn by turn GPS, speech to text, and text to speech.

Before I had my Droid, I had a Nokia N770 and an Ipod Touch.  Both of my previous devices were great!  The Nokia was a quick Linux based device, however the capacitive touch screen severely limited it's awesomeness.  The Ipod touch is frustratingly closed and locked down to what Steve Jobs felt I should be able to do with my device.

The Droid offers a good combination of the two with it's capacitive touch screen (Ipod), faster speed (N770), and open infrastructure (N770);  In case you didn't catch that, I just made the claim that a device manufactured in 2002 is faster than the Ipod/Iphone.  In addition to that, the Droid is an actual Cell phone, has GPS, and has a complete and rapidly growing default software repository.  I don't really want to talk too much about the whole data plan thing, because neither of my other devices could allow Internet access from anywhere, although for a short time I could use my Nokia to connect to the Internet through my phone via Bluetooth, but that was only at dial-up speeds and before Verizon started offering Data plans.

The first thing I wanted to play with was this new turn by turn navigation feature (I am just fascinated with GPS stuff.)  So, I got in my car and went to type my destination... then I stopped, and remembered I could just say "Jet City Espresso" and the speech to text function built into the keyboard knew what I said... I then pushed the go button, and it listed the Google Search results... the top one happened to by the destination I was looking for.  So, I started driving, and I didn't really know what to expect.  Then, my phone started telling me where to go!  It was awesome!   Then I wanted to know what happened when I went the wrong way, and it was pretty quick to pick up and adjust the directions.  Speaking of how it tracks you, I noticed it seems to use prediction to guess where you will be, and updates your real position every 5 seconds or so.  I noticed that because when I stopped at an intersection the arrow showing my car's position kept going, then corrected it's position a couple seconds later.

Anyway... so, the Speech to text keyboard rocks for text messages... buzz... email... translating to a variety of languages that use the English character sets out of the box... while other languages that use Chinese, Japanese, Korean, or Indian character sets are available with an additional package.  The Text to Speech functionality works pretty well for a few languages as well, which could come in useful next time I need to talk to a Mexican resident that doesn't speak English... or if I go to Europe.

I have a ton of other stuff to talk about soon, I already put a giant wall of text on here, so until next time.