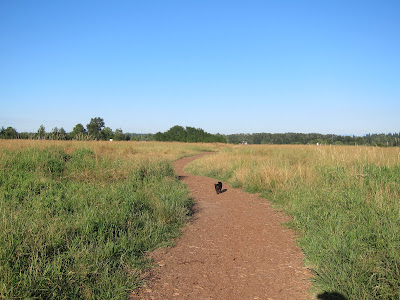 So, It's day two of my journey... or lack there of.  I've traveled 119.8 miles, and I'm right back where I started.  Today I (and by I... I mean Anthony...) changed my break pads, and then I got an oil change.  I stopped by Eric's storage unit to leave his key there and drop something off... I also went to my storage unit to leave a couple things there and to pick up a couple little items that I put away by mistake.

After all that, I tried to go to the Mac and Jack Brewery, but they had closed 20 minutes early today, so I just missed them.  So, because it's just next door, I went over to take Jaani for a last run over at Marymoor Off-Leash dog park (as seen in the photo...).

I did stop by one last time at Jet City earlier in the day for some coffee, and then I was going to meet up with a few guys from work earlier today, but that didn't quite work out... or at least it seems that way.  I will either hear back in the next 20 minutes from someone, or I will start driving (because rush-hour traffic will be over...)

Anyway.  That's all for today.  I don't think I will be going south to Portland anymore.  My timing is just off, and I guess it would be neat to see Wall Drug during the peak season. On that note, my thought is that it would be nice to make it over the mountains today.

The outcome from that will be revealed tomorrow... so, until then.