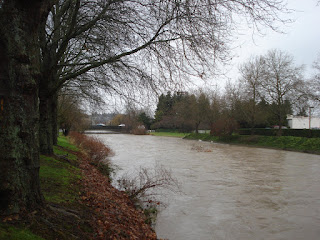 So, we've had a few nice but cold days over the past week, but the rain came back yesterday, and last night things warmed up a bit...

As a result, you can see in this picture that the mighty Cedar River has risen about 5 feet from a few days ago, and has now changed from clear to brown.

The lower part of the trail is covered by about 3 feet of water, and the underpass at Logan Ave has about 4 1/2 feet of water on it. 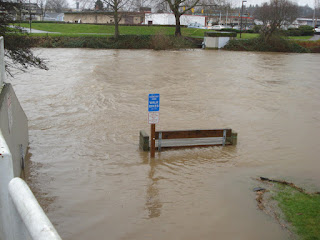 This bench is on the trail near the senior activity center, and as you can see is more hospitable to ducks than people at the moment.
The traffic reports indicate that all three mountain passes are closed, large parts of the Snoqualmie and Puyallup River areas have been or are being evacuated, I5 is being closed just north of Tacoma, and they plan to close I5 between a couple more spots between Tacoma and Portland, OR.

In short, all the major rivers are flooding.  So, I'm just going to hang out here at my house and wait it out.  At least if the Cedar were to flood I would be OK up here on the 3rd floor and my car will be fine on the upper level of the parking garage as long as the river doesn't rise more than about 30 feet higher than it is right now.
So, no real worries for me at the moment, but I hope that none of my friends get flooded out of their houses or worse.  I have already heard that Enumclaw is having major flooding problems, and all of that water is flowing this way.  I guess with a little luck the layout of the land here won't ficilitate the same type of flooding they have.  Anyway, I guess time will tell.

So, I guess to finish off, I'll put up a little slide show of pictures from Celest's birthday (yesterday), and I'll have more soon.