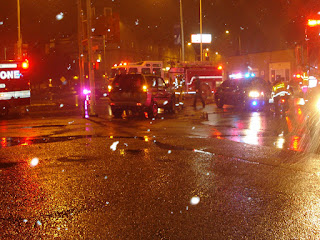 So, I don't have the statistics to support my claim of Renton's worst intersection, however I am aware of an above normal accident rate of this intersection.

In this accident was a Mitsubishi SUV VS. a Dodge Ram pickup truck, and I think I can say that the truck won.

The driver and passenger of the pickup truck were not harmed, but seemed very concerned about the people in the other vehicle.

In the SUV, the driver suffered an injury that appeared to cause lower back pain and a limp, and the small child in the back seat of the SUV seemed uninjured as the firefighters carried the child in the car seat to the ambulance; the passenger in the SUV was rendered unconcious but breathing. 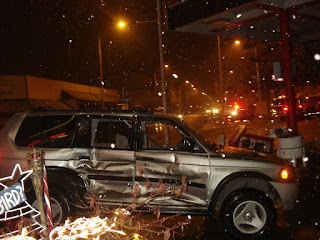 Once myself, Norm, and Paul noticed the accident, Norm was quick to approach the intersection with his cell phone to his ear while taking account for any injuries, and Paul ran to the fire station to notify them of an unconcious passenger in the SUV. Almost immediately the ambulance came out of the fire station as Paul was on his way back to the scene, and moments later police, fire, and medical crews closed the road, and Norm directed the medics to where they were needed most. In the mean time, Jaani and I approched the passenger in the pickup to try and establish if she was all right, and to attempt to establish exactly what happened.

Judging by the fact that the pickup driver was allowed to leave the scene shortly following the incident, I am speculating that the SUV driver ran a red light and was at fault, however the only thing I know for certain about the accident was that I heard a thud from behind me while I was having some coffee at Jet City Espresso. By the time I positioned myself to see the accident, the SUV was facing the wrong way on a one-way road with the rear driver side wheel slightly on the side walk; the pickup truck was pulling into the Jet City parking lot.

The Pickup suffered only mild damage, however the front bumper on the driver's side of the vehicle was smashed in far enough so that it would rub the front tire if the driver made too sharp of a right turn.

What happend was that as the SUV was traveling West on 2nd through the intesection, and the pickup was traveling South from Bronson Way S to Main Ave S. 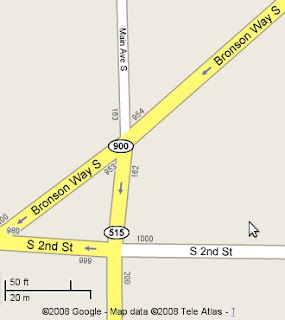 This intersection is a problem for a number of reasons. When a driver is headed West on S 2nd St, the traffic light at this intersection is out of sync with the other lights in front of the driver, and most of the traffic lights in this area are above the road, while the light for S 2nd St is on the side of the road. I have heard many times and even experienced myself that a driver will get the urge to proceed through a red light because the driver sees a bunch of green light in front of them, but the red lights are on the side.

The second problem with this interseciton is where Bronson Way curves from a South West to a South direction and turns into Main Ave S. The delay from the traffic lights before and after the curve needs to be increased. When a driver that is not familiar with this intersection approaches a yellow light on Bronson Way, they may think they can make it through the intersection because the light is yellow, but immediately after taking the curve, the driver is presented with a red light that they are not able to stop at.

The result is a large number of accidents caused by people running red lights at this intersection. I am nearly certain that one of these two scenarios is responsible for this accident.

However, there is also a problem where Bronson Way merges with S 2nd St. Numerous vehicles have failed to make this turn due to poor driving conditions causing them to take out a phone booth and nearly hitting two different buildings.

So... that was my excitement for today.

P.S. I think we have about a half inch of snow that has fallen sense this accident, however there was no snow at the time of the accident.
Posted by imthefrizzlefry at 1/04/2009 07:06:00 PM
Email ThisBlogThis!Share to TwitterShare to FacebookShare to Pinterest
Newer Post Older Post Home