The Water is still rising... 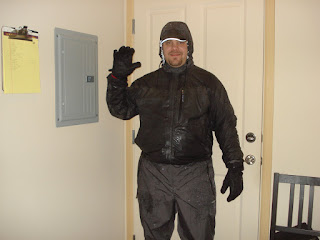 So, the rain keeps calling, and I have to say that the boots, gloves, and hat that I got in Michigan are really paying off.  Now, when I put my rain gear on, I can put the baseball cap style hat on under my hood to help block the rain that blows in the rain... and the gloves keep my hands completely dry.  Plus my new waterproof hiking boots allow me to walk through block long puddles that average six or so inches deep. 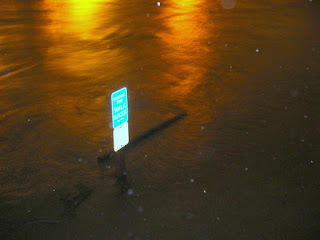 I was also able to reach my hand to the bottom of an 8 inch puddle to clear leaves that where blocking a storm drain along the path.  It seems like I have the perfect gear to keep me dry in the worst conditions Seattle has thrown at me yet!

This picture is a follow up on my previous blog post.  You can see that the bench (8 1/2 hours later) is now completely under water.  A local even told me that this is the worst he has seen in Renton sense 1994, when the water was about six feet higher.

However, it seems we have it easy here in Renton.  No major roads are flooded and the waves in the river are about 2 feet below the bridges.  However, everything could change in the hours to come.  Reports say that up river in Lyman the Cedar river now has a severe flood risk as opposed to the moderate flood risk here in Renton, which shows a potential for trouble before the river crests.

Residents along the Puyallup and Snoqualmie river areas are not so lucky; the National Guard was called in to assist with snow removal in Eastern Washington, and now 200 guardsmen were called in to assist with flood, mud, and evacuation efforts in the Snohomish, Pierce and Lewis counties.  King county seems to be getting by with minimal assistance.

The weather is crazy, but everything is nice and cozy here in my apartment.  I have power, and plenty of food and water should things turn nasty here in Renton.

So, that's an update on the storm and flooding.