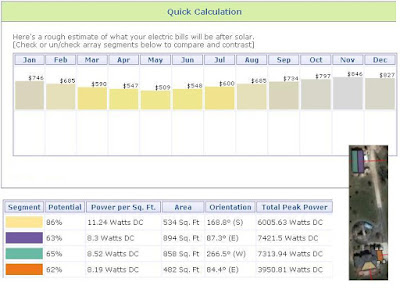 So, in honor of Earth Day (which is a rainy day here in the Pacific Northwest...) I decided to ask myself... what if my parents had Solar power on their home?

So, I went over to this company called Roof Ray outlined a few parts of the roof on my parents home, and guessed how much power they spent on Electricity each month ($1,000 maybe?  I don't really know...)  and told them to estimate how much power could be generated and money could be saved.  I was a little surprised.  I sort of thought it would generate more power... but then again I guess they aren't on the equator... But still (Assuming a $1,000 monthly power bill) they could save anywhere from about $150 to $500 a month.  Which could translate to about $3,900 a year.  I guess that would be kinda nice 'A'?  Anyway... I was also curious what impact just the southern facing part of their roof would have, and that was a meager $700ish dollars a year... The big storage garage could save as much as $2,400 a year in savings...

So, there you go mom... and just so you know, the southern face of your home would cost at least $2,670 for just the solar panels (you would also need the equipment to tie it into your home's power...  The big garage would cost $8,760 and your little garage would cost $2,410... for all of it it would cost $13,840 to cover all the surfaces listed above with solar panels.  That means it would take at least 3.5 years for the panels to pay for themselves, and then you would start actually saving money.  However, you will usually need to spend an extra $1,500 to $2,000 for the equipment to hook the solar panels into the grid.  So, you won't actually start saving money for 4-4.5 years.

So, is that worth it?  Well, ask yourself this, is the price of power going up or down?  So, in the future, you will probably be saving more money that you would be saving right now.

So, in short, you could save more in CO2 emissions from installing solar panels than I produce in a year...

Just some food for thought.