Too many remotes to lose! 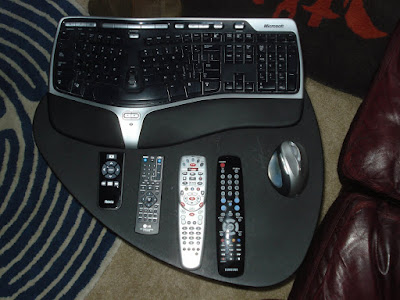 So, Ive come to the conclusion that I have too many remote controls, or at least too many controlers hooked up to my TV.  Everything here is used to control what is on my TV.  I have my laptop, DVD player, Roku digital player, and cable box/DVR.  Which translates to four remote controls, a keyboard, and a mouse.  Which I guess I really only need to have 2 remote controls out (Comcast remote and Roku remote), but every device does have it's own control that I need to keep around for full funtionality of everything.  Which on the lighter side of things, means that I have lots of ways to entertain myself.

All in all, I can work on 2 computers (with internet access), watch cable TV now, or record shows that I want to watch when I have time to watch them.  I have a limited number of movies that are available on demand through Comcast, however I don't want to pay for movies, so I just get the ones that are free... or in other words older moves that don't have much commercial value.

My Roku player gives me the functionality of watching a large number of movies both new and old at the click of my mouse, however I have to add the movies to my instant Queue using a computer (or once I get an Android phone I can do it that way too.)  The Roku player also offers me the ability to stream movies from Amazon.com, which I have the choice to purchase or rent the movies, and stream them in high definition.

Actually, both my Roku player and Comcast allow me access to high definition content that my DVD player can't.  However, I have access to newly released movies via Netflix DVDs, plus many other titles that I would otherwise have to pay extra for.

However, the newest and shiniest toy is the DVR... which is a technology I am very familiar with, but never really had in my home...

It changes the way you look at TV.  If I am watching something interesting, but I have to go somewhere now, I can simply hit the record button.  Which is much like an old VHS player, but without having to mess with tapes... plus it has the capacity to record anywhere from 15 - 60 hours, depending on HD versus standard quality video.  Plus, and this is probably the most important part, because cable provides that nifty guide function to tell me what will be on TV days or weeks from now, I can easily select the show I want to watch and hit record from the menu... no more messing around with setting a timer and hoping the clock on the VCR is set to the right time.

The final function that my cable box plays is a simple clock.  One that is accurate and never has to be set.it just tells me what time it is plain and simple.  The TV will tell me what channel I'm on anyway right?

Anyway.  I don't know if I'll keep the cable TV.  I guess it would be nice to actually follow the next few episodes of Eureka on the Scifi channel, but then again, if I just wait a week longer, then I can watch it all on Hulu... even if it is only 480P... (a wide screen standard resolution picture.) 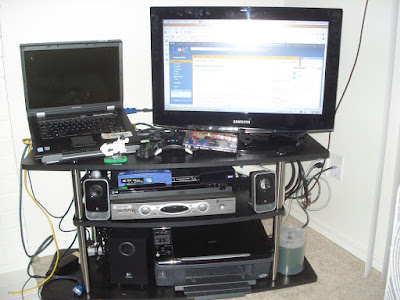 As for the monsterously dense entertainment center, you can see my TV, Laptop, Wireless Router, USB Hub, Speakers, DVD Player, Roku player, Cable box, Sub-woofer, External Harddrive, and Printer/scanner/copier (my cable modem is behind the TV too!)  all crammed into my little entertainment center.  You can also see off to the left, I have a yellow netowrking cable, VGA monitor plus, headphone plug, and usb cable that can connect a second computer to the whole system so I can share the TV, speakers, keyboard, mouse, and network with another computer (with or without Wifi.)  The only thing I realized today is that if another comptuer were hooked up here, I wouldn't have anywhere to plug the power calbe in to.

I guess that's ok though I can worry about that in six months... when I get rid of cable and get a computer to turn into a true multimedia center PC.  Somthing with a dual or quad tuner in it (so I can record/watch 2 or 4 channels at the same time.)

Which leads me to my final note about what makes this DVR awesome VS a standard cable box or VCR... it is a dual tuner DVR.  So, it allows me to record one thing, and watch a different thing, or just record two things at the same time.  It is really cool, and anyone paying for cable should consider it.  Although I have to admit I had to pay $6 extra every month for HD channels and a DVR, but if you have an HDTV and are willing to pay for cable, there is no reason not to... although I was kind of shocked that I had to pay extra for HD... you'd think with standard TV being HD, the cable companies would wise up to the whole thing... but then again they are still trying to act like they are strugling so they have a chance at a corperate bail outs.  despite the fact that operating costs for Internet Service Providers decreased in 2008 before we officially declaired we were in a recession.

I just want to say that DVRs and Roku players are totally awesome!  Cable has yet to convince me I want to keep it, but I have 30 days to decide(and I don't pay a thing if I cancel the TV before then.)  So, we'll see how that works out.