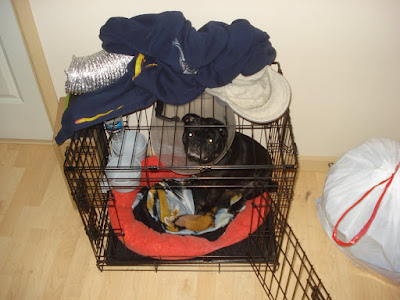 So, today is day 101 that I have been unemployed.  Which also means this is the first day that I would have been elligable to start back at Microsoft, however, I haven't gotten my new start date yet.  I have a feeling that the missed call I have on my phone could provide some insight to that.  Anyway.

I got a new job.  I start soon.  I am an STE at Microsoft Game Studios working on Network Testing.  Which makes me think that the position is really with MS Game Testing Organization, but it doesn't really matter much because GTO is part of MGS.  so, that's what is kinda new or at least will be new this week.

As for the picture of Jaani in his cage with a cone on his head... Jaani had a lump removed last week, and yesterday he had the stitches removed.  So, even though Jaani only had a cone on once or twice while the stitches were in... now that they were removed, he keeps trying to scratch at the scar.  So, I had to cone his head to keep him from messing with the big gash in his head.  He actually tore it open a little as soon as we got home from the dog park... I took him to the dog park because yesterday the weather was so nice, and he was so good at the vet...

As a third and final note, I have been playing with multi-contact touch screens recently.  James and I actually put together this drafting board like thing that we can use as a Natural User Interface (NUI... or as I kind of like to call a NUBI (Natural User Beta Interface))

Here is a slideshow of the differet pictures of the three prototypes we have put together...  I will be posting more information about exactly what we have done on the tech blog, but for now here is a sneak peek.

Get your own
So in addition to all of that stuff, I am also trying to get a new blog put together.... yea, that's right, another blog for me to neglect for long periods of time... but anyway... it is called Three Wiredos (We spelled Weirdos wrong... I know...)  So anyway... as the name may imply to those of you in the know, it will be a blog written by myself as well as my new room mates James and Emerald.  Honestly, the reason I created the blog is so in the event that I don't update the blog every day, maybe somebody will, but it doesn't look like that is likely.  We will have to see what the future brings.

So, anyway... I'm calling that an update.

So, there you are mom, a new blog entry for you to read! ;D