Lawerence Lessig at Greenfest... and I moved. 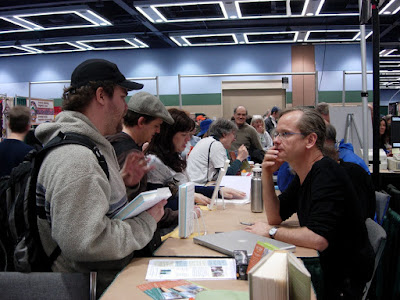 So, it was a long weekend.  Not only did I move almost all my stuff, but I also got a chance to meet Lawerence Lessig at the Green Festival at Seattle's Exibition center.

It was really cool, Lessig gave a speech about Green Culture, which included an incredibly awesome powerpoint presentation and Lessig's usualy ingenious advise about copyright laws and how this country is too concerned with things that don't matter, and not concerned enough with things that make a difference.

After the talk, Lessig was signing copies of his newest book Remix which focuses on the phenominom on Youtube that involves modifying existing content to create an original work.  Similar to sampling in Hiphop music... in a way.  I also felt kind of special because I was able to recommend a totally awesome website called Acedemic Earth, where people are able to watch videos of lectures from schools like Harvard, Stanford, and MIT on the Internet... and all of the content is provided using the Creative Commons copyright (which Lessig played a leading role in creating.)  He liked the idea so much that he opened up his Macbook and took a wrote a note about it, and also said that he would look into releasing video of his classroom lectures on the site.  BTW, Lessig is a professor at Stanford University, and he will soon be moving to Harvard..

So, it was really cool to go to Greenfest and see Lessig talk, and then I also walked around to all the booths and look at all the solar systems and alternative energy and other types of sustainable living proects.

The other thing I did this weekend was move all my stuff.  At least almost all of my stuff.  I guess I would have been able to get everything if I didn't go to Greenfest, but I wanted to go (and I could get in for free) so I had to go... plus it's not every day that Lawerence Lessig is in Seattle!