I use a little power, but not too much... right? 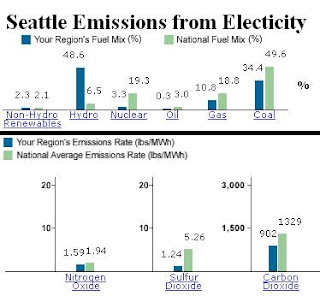 I'll start with a quick summary for those of you who don't have a lot of time:
1. I tracked my Entertainment center's power... and used the data to estimate:
2. I estimated ghost power used by my entertainment center (if I left the entertainment center off but plugged in 24/7):
3. Finally, I researched some statistics about world wide emissions, population, trees, and stuff like that:

I also added sources and more details below... so, feel free to browse or read the whole thing.

This week was a testing week for me at home. I know I test at work all the time, but at home I am trying to figure out just home much power I really use. So, I started this little test by posting a bit about my over all power usage to the Frizzlefry tech blog (which just got a new look! Ironically it is the same look as this blog, minus the logo...) and now I'm just going to blurt out a little bit about my day to day usage.

So, My entertainment center has been the focus of my testing this week, and I have to admit that the results were a little different than I expected. I thought that my entertainment center would be a huge power hog. After all I do have a large amount of electronic stuff in my apartment, and the bulk of the stuff that I use all the time is in one place. So, for the experiment I hooked my Kill-A-Watt to my entertainment center, and I have the following items powered through it:
So... how much power does all that stuff use? Well from normal usage of what ever it is I do on a day to day basis, it uses 1.43 kilowatt Hours (kWh) on a weekday, and about 2.36 kWh on a weekend day. While I am sleeping I use about .43 kWh, and I use about .6 kWh when I am at work. This means that in a typical week (and I am predicting usage between yesterday at 07:30, and tomorrow at 23:45) I probably use about 10 kWh.

One other factor that I didn't really think about too much was the draw of "ghost power". This isn't the result of some coporious entity flying around and plugging in invisible electronics, but this is the power that all of my stuff draws when I am not around to monitor it. Ghost power is generated by all of the electronic stuff people have these days. You see, one upon a time, when you turned something on, you actually flipped a physical switch (Like a light switch...) and now a days electronic devices have a button that is connected to electronic switch inside the device. Even when the device is off, these devices still draw power. Some devices like (e.g. desktop computers, TVs, monitors, transformers, ect.) draw power to keep capacitors charged at all times; that way you don't have to wait as long for them to turn on. These also draw power while the devices are off.

Now, in perspective, from multiple sites around the Internet, I've come to the conclusion that the average person probably produces somewhere around 700 lbs of CO2 every year... so, I am only producing about 1/7

So, world wide, we produce somewhere around 109,560,000,000,000 (109 Trillion) lbs of CO2 every year. There is nowhere for that gas to go. We breathe it in, it absorbs heat from sun light, and I am kind of sure that the trees can't deal with that much CO2... at least (assuming a mature tree absorbs 48 lbs of CO2 per year) around 2,282,500,000,000 (2 Trillion) trees just to sustain human life. NPR Said here that "In 2005, there were 400,246,300,201 (more or less) trees on our globe," which was a rough estimate produced by NASA. At that time there were a little over 6.4 billion people on the planet. One other key factor is that corporate emissions from factories and offices are typically far greater than emissions from individuals; plus the human population is growing exponentially about every 40 years (and speeding up) so we will need more factories. I am really starting to think we may have some sort of problem.

However, I don't think we have a definitive answer to the problem yet... but projects like the smart grid, and Google.org, and countless others will help. We should start by getting rid of fossil fuels, and creating a smarter and cleaner electrical grid.

So, if you read the entire post and the summary at the beginning, you may see something I forgot to change. I made a few mistakes the first time I wrote this post, and when I was writing the summary I checked to verify everything... I may have forgotten to correct a couple things... I am in a hurry to get this done before lunch ends.