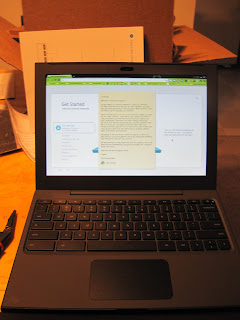 So, if you noticed one of my buzz posts from not that long ago... Google sent me a CR-48 notebook computer with Chrome OS loaded on it.  My first impression was that this thing boots really fast.  Then I found out that it came with 100MB a month for the next 2 years; that was awesome to find out, but it only took me a few minutes to realize that I can use that in my sleep... in less than an hour.
I had a few complaints right out the gate... 1:  No support for USB thumb drives or SD cards... 2: the content browser is a poor replacement for a proper file browser... 3: they replaced the function buttons with some kinda weird buttons, and they don't respond the same way that function buttons respond on a Linux computer.  Specifically, I can't press ctrl+alt+F2 to get to a command line.... at least not without putting it into developer mode... which I will do eventually, but I want to figure out all the bells and whistles first.
Another thing I didn't like is that, by default, it does not require you to type your password after it wakes up.  Maybe when I first set it up I missed it (which I'll look for after I reset it); however, a quick search on the help  forums revealed that the setting is easily changed within the settings page (which is really close to the newest settings page for the development branch of the chrome browser)... even though I kept "not seeing" it when it was right in front of me.
I do like how fast it wakes up.  If you just want to surf the web the software is perfect... and if you don't watch a lot of full screen video content, then the hardware is perfect too.  I, on the other hand, watch a lot of video content full screen.  So, I would like to see a better video card if I had purchased it... at least full screen 720p playback is a must!  I mean, my phone can do that...
As far as the look and feel, they gave me some stickers for it, but I don't think I'll use them.  I like the plain black with no logos look.  It is really sleek and I think I'll keep it that way... at least for a while.  I might end up covering it with stickers like my Lenovo... and Sylvania... computers, but for now, I'm just going to keep it as it is.
I would have more pictures, but my camera is sort of broken again.  This time the trick I used to fix it last time doesn't work... and actually I think I made it worse by trying to fix it.  However, I haven't given up hope completely yet, and I think I know that I'll get a warranty next time I get a new camera.

Anyhow... that's my first impression of the CR-48 Chrome Notebook.  I'm sure I'll have more in the coming days.