More screens in my office! 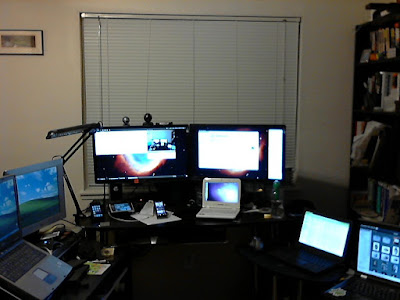 So, after a long day of wearing down the battery in my CR-48, I decided to get a picture of all the gadgets together. I have the two laptops, the two netbooks, my Nokia N770 Internet Tablet, Ipod Touch, and my Droid Incredible (phone). All in all, I am representing Ubuntu Desktop, Ubuntu Netbook Remix, Chrome OS, Android, Meamo, iOS, and (shame) Windows XP. So, needless to say, I have a good representation of most of the popular OSes out there... with the exception of Macintosh, which I don't expect to obtain any time soon.
So, I think it's kinda fun to be able to say I use seven OSes at home on a regular basis, and if you include work, then I run 9 (we use Windows 7 and Windows Phone 7 at work)... technically you could even say I run 12 if you include Xbox, Roku, and DD-WRT.
Enough about technicalities. Let's talk more about the Chrome OS Notebook. I went around town using it all day, and I have found it mildly irritating that it doesn't have any sort of real off-line functionality. So irritating, in fact, that it makes me want to re-image it to a real Linux distro... or at least chromium (which would allow me to add more Debian based applications. If Google ever wants people to adopt Chrome OS, they are going to need to add a list of things(without going into developer mode):
So... after getting home, I caved in and hit the switch to put the CR-48 into developer mode. I just couldn't stand not being able to use SD cards or USB sticks. I am a little annoyed that if I want to open any type of file other than html, pdf, txt, or other type of file typically opened by a web browser, then the content browser tells me it doesn't know what to do with it. This means, that if I want to open a text document on a USB drive, I need to upload it to some sort of web service that will recognize the file then edit the file with that web service. grr.
However, on the bright side... I the "next window" button works very nicely to switch from the browser to a shell and back... plus, I can now view the contents of my SD cards. How you may ask?
I'll tell you:
It's just that ridiculously complicated. I mean, why didn't google just do that in the first place? then they just need to give the chronos user read/write access to the /media directory and there you go, users would be able to read from and save to USB drives and SD cards.
On the not so simple side of things... it doesn't appear that the CR-48 will connect to my blutooth logitech mouse nor my blutooth jawbone headset. I am able to get to a root terminal and use the hcitool to scan for blutooth devices and even get information about the devices, but it won't connect to the devices.
I don't know if any tech savvy people have tried this yet, but if you find anything useful, it would be nice to know.
So... anyway. That is probably way too much babbling about stupid config stuff that should have been done before this thing was shipped, but maybe it will pan out soon.
Later,
SteveO
Posted by imthefrizzlefry at 2/13/2011 12:12:00 AM
Email ThisBlogThis!Share to TwitterShare to FacebookShare to Pinterest
Newer Post Older Post Home