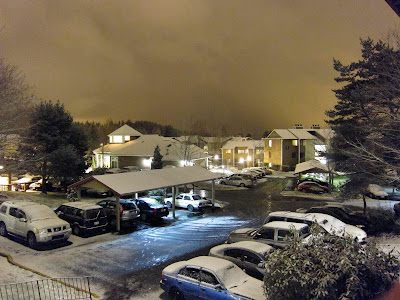 Well, if my team at work was still part of the reserves, we would have had the day off, which is kinda ridiculous because the snow didn't even start until about 6 or 7PM.  The reserves had the day off because the Lake Washington School District didn't have school today, but the crazy part is that the roads were perfectly fine this morning.  So, our lab had to go in, but there is a chance that tomorrow will be a bad day for driving.  I guess that doesn't really give anyone on our team an excuse because we all live pretty close to work, but it might mean another day without the extra people we requested from the reserves team... anyway, enough about work.

I recently discovered that Comerica started charging me a ridiculous fee because I'm not keeping enough money in the account... so now I need to mail them a letter so they will close that account.  I figure that I can't even use the account, and BECU is so awesome that I don't need a stupid bank that charges me money to keep my money there.  Plus, with BECU, I not only have access to a credit unions here in Washington, but all over the country, which is something that Comerica just doesn't offer.

So, other than that, I got some lens filters for my new camera, and I plan on running around and playing with them this weekend, but for now, I just have another HDR photo of the parking lot outside my apartment... which now has snow!

Anyway, that's it for now.