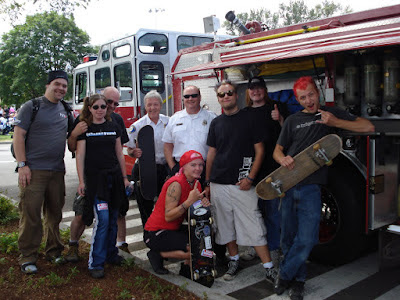 So, after all the time I've lived in Renton, I finally got around to going over to Renton River days! It's an event sponsored very heavily by Ikea that takes place every year.

I wasn't actually going to go... I actually was just watching the parade go by as I sat at Jet City helping a friend unlock his Iphone. After we got it unlocked, we went over to the library to test out the Wifi on the phone. We hung out a little bit in the library, and looked at what books they had on the shelves, and then as we were leaving I ran in to some friends who were on their way to the festival.

Shortly after taking this picture I actually started talking to some kid who is currently going to school at BCC and was wondering where to look for a job. I told him about my experiences as a contract worker at Microsoft, and told him what I thought about the whole situation. I think he was happy about talking with me, and with a little luck he will learn a little from my mistakes too.

Anyway, Jaani and I are doing well, and things are good. The weather is nice and I can't say I have any complaints.