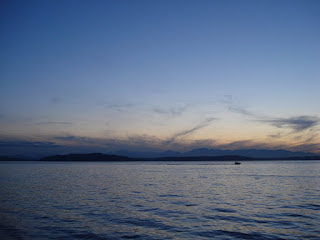 so, tonight I went up to Alki and went for a walk near the beach by all the bars with Allister. We went to a bar, got a burger and had a couple beers while the pistons vs ohio game was on. it was such a nice day all day long... Mt Rainier was out all day, but I never got a good shot at the mountain... I did however get a good shot at the Olympic mountains. Then, after I dropped Al off, I went home, and Maninther had brought over a whole tray of like 20 or so samosas... I love samosas! They are these pouches of bread filled with potato and spices and stuff... they rock.

Anyway, on our way home, we took a picture of Seattle as the night came near... which turned out ok... I think I've taken better though... and Evelyn got mad at me for taking Alister even though yesterday I told him I would take him up there, and she said that if she went up there she wouldn't want to go if Allister was going. She says I treat her like s*** when I'm with my friends... I think it's because I don't give her all of my attention and she gets jealous. anyway... here is Seattle... It's not the best picture, but it gets the point across... 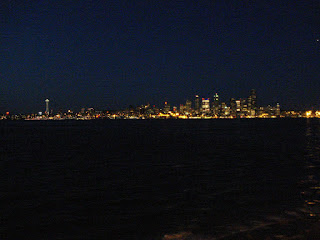 P.S. the icon here means that I used Picasa to put this picture on my blog... it works pretty nicely if you select all the pictures you want to put up at once.