An update from last weekend... 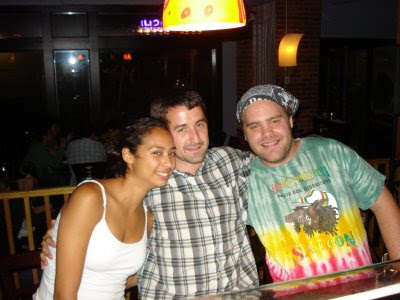 So what did I do this weekend? Well... I canceled Blockbuster and signed up for Netflix. That was a good idea, because now, instead of going to the store and having a limited selection... I can go onto the website and have a limited selection. Plus, and this is the big one, I will never have a late fee.

I think I like that idea a lot, because I always forget I have a movie at my house that needs to go back to the store. I just rarely ever use my car, and going to the store sucks.

Anyway... plus the other development involves that picture I put up with this post. This is James, Emerald, and I and Nijo Sushi bar! It was really good! We ended up showing up right at happy hour... so we took advantage of the situation to drink some $130/bottle Saki that was much cheaper than normal ($4 a shot)... we got 10 sushi rolls... I tried a Japanese brand of white ale... and they had some normal drinks. I liked the white ale, it was pretty tasty and I could tell the water was different than water normally used in American beer.

It was good times! Then Sunday I took care of some chores (cleaning, shopping, etc...)...

Monday was work... Today is work... the rest of the week I work... Although Friday I have a Webinar on Computer Security.

the 28th is Google's App Engine Hackathon... so I'm skipping work (I already cleared it) and going... it's in Seattle! which is totally cool because they never have these sorts of things in Seattle.

And other than that... I think that makes an update.