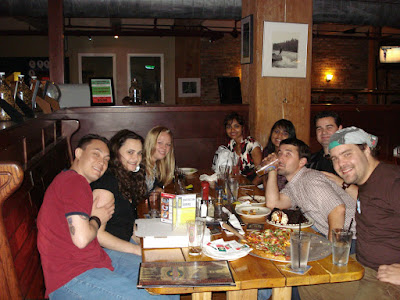 So, yesterday was Jame's Birthday!  So I went down to Tacoma, where I met James, George (his brother), Shelly (Evelyn's Sister), Evelyn, Kait, Twila, and Anthony (in that order, Counter-Clockwise around the table away from me...).  We went to a brewery in down town Tacoma first, then we went to this club called Swiss after that.  About 2AM I walked Evelyn and Shelly back to Evelyn's house (2 blocks away).


Then, I had to wake up this morning and go in to work.  I got in around 11AM, and I will be going home shortly... around 7:30 or 8, but I'll be coming back in tomorrow... We had croissant sandwiches for lunch... pasta from California Pizza Kitchen for dinner... who wouldn't come in to work? 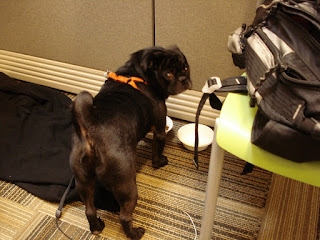 I braught Jaani in with me today!  He loved it too.  He had dinner right here in my cube.  At lunch, I walked him over to the dog park (really close to my work) and he ran around for about an hour, then came back and slept under my desk.  He has been so good today, I just wish I could bring him every day... but that's against company policy.  I have heard a few reasons why... I know they used to allow dogs, but then one of two things happened: either there was a flea epidemic among pets in one of the buildings (which cost a lot of money get rid of them...), or someone had allergies and complained.

I'm not sure which one is true... actually, I have heard both stories from equally creditable people, but I don't have any way to prove/disprove either story.

Anyway... I must get back to work, I just wanted to give a little update.

P.S. Today was such a nice day, and I almost feel completely better!  I just have a little bit of a runny nose.
Posted by imthefrizzlefry at 8/30/2008 06:38:00 PM
Email ThisBlogThis!Share to TwitterShare to FacebookShare to Pinterest
Newer Post Older Post Home