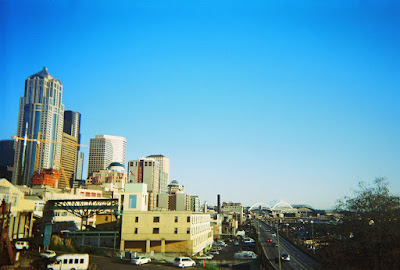 So... Yesterday I went down and picked up Evelyn... she was all excited to go see Twilight in theaters... I had really mixed feelings... somewhere between the horrible acting, and the interesting twists on vampire lore... apparently in twylight vampires can't go in the sun because their skin sparkles in direct sunlight... as opposed to bursting in to flames or turning to dust... and every vampire has some sort of power (reading minds or seeing the future...)  They even went so far as to say that a local Washington Indian tribe made a deal with the vampires to not tell the white man about who the vampires really are... it seems the main family of vampires that the story is about doesn't feed on humans (but feel incomplete merely feeding on animals.)

Then today, we got pictures developed at Wallgreens, did some basic shopping that needed to get done... I got my ears lowered... and for the first time I'm not happy with the way the person cut my hair!  I am not picky at all about that stuff... but she cut it about 2 inches shorter than I wanted... and it isn't cut even at all.  I'm not too happy with it.. but oh well.  In a little while

Then went to go eat at the Olive Garden near Southcenter Mall... however... when we got to Southcenter, we noticed that there were no cars in the parking lot... then we saw police cars blocking the entrances to the parking lot... finally, we heard on news radio (good old KOMO AM 1000) that there was a shooting at one of the southern main entrances to the  mall.  A man was killed... I guess there was a fist fight and then the whole thing ended in gun fire.

I guess we lucked out that we didn't get there an hour earlier (even though we would have been going to a separate building on the other side of the parking lot...)  Plus it was good that we went to go see the movie yesterday because today's viewing at the same time was canceled.  I don't know how the online refunds would have worked for that.  But even then, to see a movie in that mall and eat at the Chicken Now Seattle restaraunt in the food court... we would have never been on the first floor where the incident happened.

So... because we couldn't go to the Olive Garden, we went to Mizu Japanese Steakhouse for dinner... it was pretty good... and we had a fun cook at our table.  And now I'm back home.

Oh well... oh, and in breaking news, I just took an ear away from Jaani and gave it to Babli because Jaani growled at Babli for sitting near him... then he growled at me when I touched his ear... so he lost the ear for being mean.

So, Ev went home... Well, she is going out with her sister and a couple of their friends for the evening, and I don't have to take her home.  I have to say it was a really good day for me.

I got out of the house and away from my computer for a while... I got a hair cut for my interview... I got some food and stuff for around the house... I got some pictures that I have meant to get developed for about 6 years... and I went out to eat at a nice restaraunt... however, the best part about all of it: I didn't pay a dime!  Well, I insisted on paying for some of the food and my body wash... plus I payed for coffee because Ev was spending way too much money... but still... I only speant like $20... which is really good!  donsidering that the hair cut, pictures, and dinner were all individually more expensive than that... which is awesome.

Anyway... that's about it for today... Jaani and I are going to watch a movie and go to bed.  No more spending money until I at least get a new job.

P.S. for those of you who may not be completely in the loop... as of yesterday at 5PM I am officially unemployed.  However, I'm not too worried about it... I doubt I'll have much more than an inconvienience from it.
Posted by imthefrizzlefry at 11/22/2008 08:47:00 PM
Email ThisBlogThis!Share to TwitterShare to FacebookShare to Pinterest
Newer Post Older Post Home