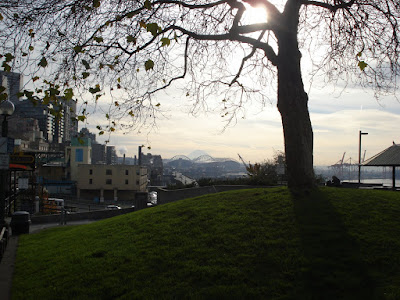 So, I went up to Seattle today for a couple of interviews.  I had one with a staffing company, and another for a full time position.  However, I had a bit of a break between the interviews, so I went to the park next to the Pike place market... it's right near the waterfront, and I sat under this tree. 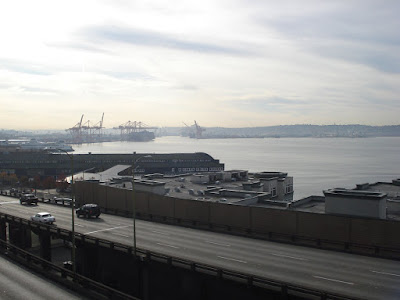 There was a really nice view this morning, as I could see Mt Rainier clearly (the mountain is in about the middle of the picture...)

I sat there for a while, and looked over at the Port of Seattle.  I always love the way all the cranes look lined up along the entrance to the Duwamish River.

It was a bit cold on the waterfront though, however I found that I have a way of dressing for the weather. 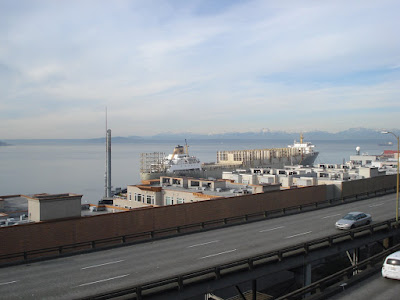 I also looked across toward the Olympics, which were out and showing clearlly in the background.

It seemed like a perfect day to be in Seattle.

I found myself hanging around in the park for a while, until I started to feel the chill of the wind comming off the sound. 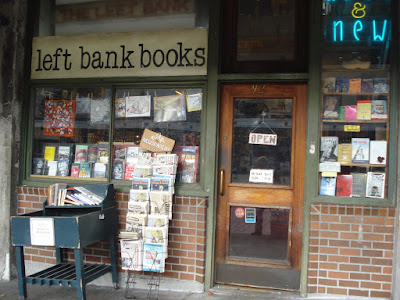 I found this cozy little book store near the corner of Pike and 1st.  It is right at the enterance to the Pike maket, and after entering, I found it had an interesting collection consisting almost entirely of books you would never find in a Barnes and Nobel or Borders.  The section on Femminist studies was most of a wall, and the section on antidisestablishmentatianism was larger than I thought possible. 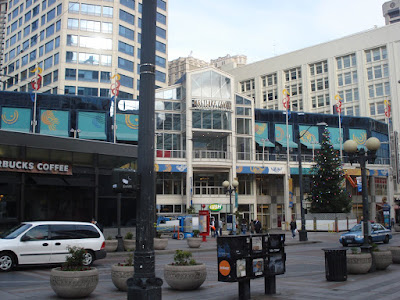 anyway... after walking across half of down town Seattle to get to my second interview, I walked over to West Lake Center (It's a mall with a subway/bus-tunnel station in the basement.), where I stopped at the Starbucks to use the rest of the money I put on my starbucks card...

It seems I need to use the card once every 30 days just to make sure that I have free internet access when I go to the airport on the 17th...

so anyway then I had to go down to the subway... 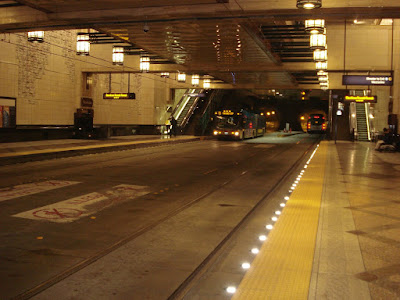 AKA. bus tunnel.  I find it pretty funny that there are train tracks on the road...  It's part of Puget Sound Transit's light rail link.  Apparently there will be a light link system that goes from Everett all the way through Seattle to Tacoma eventually... so far they have the tracks laid out from the U-district (North Seattle) to Sea-tac Airport... every once and a while you can see one of the trains being tested on the tracks... either that or it is a train operator taking a test.  Either way, you see the trains (which are only one or two cars long...) just traveling and stopping all over the tracks...

After waiting at the station for about 10 minutes, I took the 550 out to Bellevue, then had a third interview.  I think all the interviews went pretty well, but I won't be happy until I hear back from someone about where I am going to work.

I hope that a decision will be made soon, and I can get back to work because I don't like being unemployed... I will have plenty of time off when I go to Michigan, and probably work half the time I'm there, but for now, I don't want to be a worthless pile that can't even get christmas gifts for my neices and nephews.  So, that's my first day without a job.

So, wish me luck with the job search.  I'll keep everyone up to date.