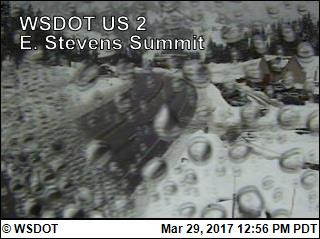 So, it looks like we are starting to get snow up on Steven's pass.  This is what it looks like up on Steven't Pass today, which is good because it's more snow than there was yesterday.  The Army Core of Engineers has been saying we should expect more flooding in the low lands, snow in the mountains, and land slides on steep hills.  This is because of the large amount of rain we are getting... combined with the strong winds.
However, that doesn't change the fact that I am at work... and Jaani is sitting at home... just waiting for me.

I also found this other web cam of the Olympic Mountains from Hurricane Ridge (just south of Port Angeles).  It sure looks nice pretty over there.

Anyway... I guess I just wanted to put up a few pics from different web cams in the area.  I wish I could have found one of Renton, but there was no such luck... at least aside from traffic cams.

Other than web cams... it is raining... again... so, I guess that means Steven's pass might have more snow tomorrow.


Anyway, I guess I'll just call that a post.