Christmas is over now... 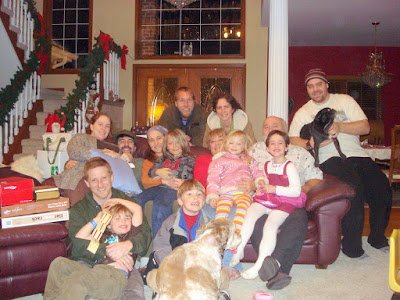 The holiday season is just about over. And at that note so is the year... So at least I got a good picture of almost my whole family. I have everyone except my brother... so that's actually pretty good considering. He decided to skip out before I had a chance to take the picture... oh well, maybe I will have another chance to get everyone in one picture... I hope. I usually only get one chance at that every year, but who knows.

Just to give an update on the weather, today is a crazy day... definately Michigan weather... we had freezing rain last night, it was about 30 degrees this morning, and iGoogle tells me that it is 56 degrees out right now. It's a really nice temperature to go out without a coat or sweater, but all the snow is melting (which is flooding everything...) and it makes it hard to keep the dogs clean. So, I have to try and keep them from going on the grass... ha... yea right.

I got some cool stuff for Christmas. I got: Gloves, 2 hats, a frying pan, a beard trimming kit, 16GB USB memory stick, 2GB memory card for my camera, 2 programming books, a book called The China Study, Socks, a 2009 Michigan calendar, a calendar with pictures of my family, a box if cliff bars, a coffee mug, and more stuff... pretty much everything I asked for and then some.

So, I'll call that a quick update, and I'll post again soon.