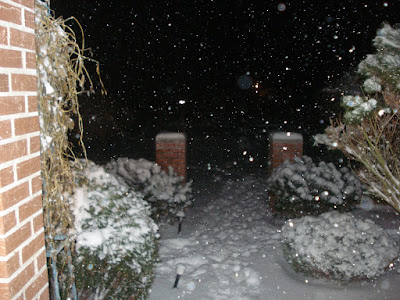 So, I'll let you know what project me is in a minute... I just wanted to start off by saying that it was snowing when I got here... and it is snowing now that I am about to leave.

It is 24 degrees outside, and just a few hours ago there was no snow on the ground.  Now, it looks like we have at least an inch, maybe two.  Plus, to make things more interesting, the snow does not seem to be slowing down at all.

So, that being said, I think I will actually introduce project me.

Get your own
A sort of neat idea I have to make an animated GIF image of me growing up over the years... so far I am missing 10 pictures to make the sequence complete, but today I just scanned in 14 of the 15 pictures I need... plus a couple extra of when I was young... a family portrate from less than a year of my birth, and some other stuff too.

I really think the whole thing will be cool once I get everything up to par.

anyway... for now I'm waiting until I get back to Seattle, where I will be able to look through a few more pictures I have laying around... and I guess my real goal is just to show my face.  anyway... until next time...