A nice sunset to finish the day... 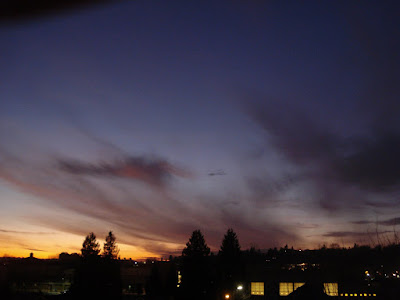 So, another day... I have been trying to figure out what I can do to keep occupied, but I don't really know yet... hope I'll figure something out soon.

On the plus side, Jaani is loving it now that I'm home all day. He gets to run around town with me all the time... never by himself. He loves it!

Oh, and a friend of mine was having that stupid Qwest with MSN issue... the #1 reason to hate Qwest... So that reminded me that I could call Qwest in an effort to lower my monthly bills, I called Qwest today to get rid of my land line... it figures I never use it anyway. Well, I never considered it a priority because I thought it was only costing me $12... however, it turns out that it costs $12 for the phone... and $6 tax on the phone... plus they were charging me $5 a month for this phone line/model repair thing... which is rediculous.

So, I got them to change my service and drop $24 a month off my bill.

Then they tried that old MSN trick on me again...

FYI let me explain the MSN thing:
First they say sign up for Qwest with MSN and it is a few bucks cheaper for a month... but in reality after a month you get a bill which is $40 more than without MSN... my friend got this problem after signing up, when half the time they don't say you are getting MSN, and when you cancel MSN they say you need it as you ISP... when what you really want to do is tell them you want Qwest dsl at X Mbps with Qwest as my ISP. Which the funny part is that no matter what, Qwest is you ISP, they just want you to use MSN for email and all the stuff that you can get for free on the internet anyway...

In my situation today, they tried to tell me that they would never raise my price for Qwest with MSN, but they wouldn't specifically send it to me in writing. At which point I replied "That's because you know the price is going to go up in a month, and you just lied to me about the price..." the lady just kind of got quite and tried to speed up the process.

One more note about people who work at Qwest, if you and angry and mean it takes about half the time to get what you want. If you are nice and polite, they don't try to get you off the phone as fast as possible. The sad reality of customer service telecenters.

anyway... that's about all I have to say. 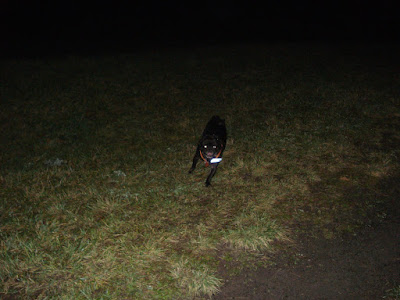 Oh, and I got a semi-good picture of Jaani with his head/neck light at the dog park last night... the head light is that white thing under his head.  You can't really tell, but it actually shows him where he is running as well as shows me what he is sniffing.

everyone always thinks it's such a clever thing to put it around his neck... they always ask questions and tell me stories about the $60 thing that just didn't work... then I tell them that you can get a normal head lamp that goes on a human head, for like $10 or less.

They look at me a little funny, then say, that's good thinking...

So, that's really it for now.


P.S. This icon means I used Picasa to get the pictures on my blog -->