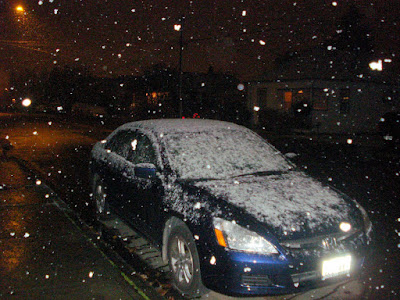 So, every once and a while around here we get snow... so here is a picture of snow in Renton. Now, the thing that is more interesting than most of the pictures I put up about snow in the Seattle area, is that this picture is taken in the low lands. We usually don't get too much snow down in the valleys, but it does fall in the hills.

Now, I have this strange feeling it won't be there when I wake up tomorrow morning... I actually think it will be gone as soon as the sun starts to rise, but while it's here, it's nice to take note.

Legend has it... at least the natives around here say... that it used to snow every year in Seattle, and many of the people here credit the lack in snow fall to global warming, but who really knows for sure?

Some food for thought.