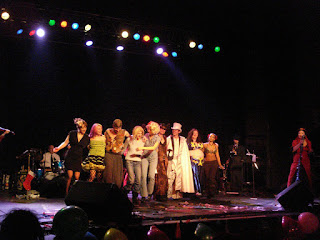 Tonight was a great Night!  I went down to the Majestic Theater in Detroit for a variety show that included some really neat acts.

I must admit that the main reason I went was to see my cousin perform on stage as The Amazing Flec, and even though he stole the show, the entire evening was great!

The host of the evening's festivities was a group by the name of Torch with a Twist. 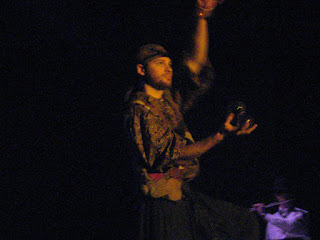 
Just watching his stage presence and ability to capture the audience is amazing to think about... actually, rather than talk about how amazing it is, maybe I should just show a video...

So... here is a video of part of Flec's performace: 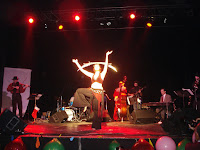 I also have to say I liked this performace by the lovely Lex who was dancing with swords...

I mean, between the burlesque, jazz, blues, and circus flare the entire show was awesome!  It kept me wondering what was next and wanting more!

The entire group was friendly, and came out to visit the crowds and everything, it really was a great time for all! 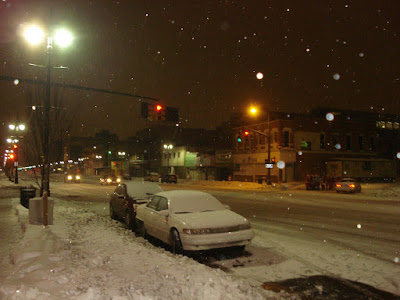 Then, as I was leaving the Majestic Theater... more snow... and SantaArchy!!!!  So, for those of you who don't know, the SantaArchy people are mostly Burners (people who drive out to Nevada to go to Burning Man every year...)

You can actually see them over on the right side of the picture almost being hit by that car with it's break lights on... These guys go bar hopping around this time of year dressed in sexy and "different" Santa costumes... Some of the variations I saw had Elf ears and that sort of thing. 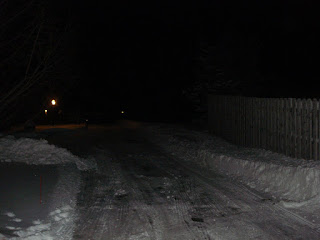 Which brings me back to snow... which we have been getting a bunch of lately.

As you can see here, the driveway had a bit of snow on it.  So much in fact, that I was stuck at the house all day on Friday until the plow guy came around 22:30PM EST.  It was just late enough to make sure that I was too late to meet my brother and Flec for dinner... bummer.

However, today made up for the day I was snowed in... and when I drove home, there was only about an inch of snow on the Interstate, so everything was fine.

anyway... I guess I'll call that a post.  I'll put up a Picasa Album with all the Cirque Fest pictures once I get more from my cousin and my brother... however, until then...