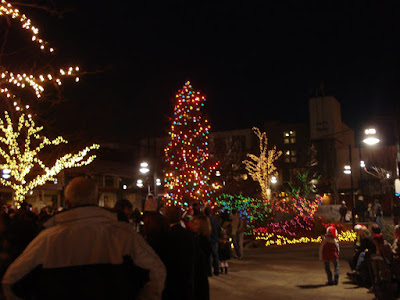 So, today was the tree lighting in Renton's Piazza.  The whole place was covered in Christmas lights, and and the majoy came out for the event.

I had Jaani out there for a while, but he seemed to be getting grumpy and cold outside, plus I could kind of tell that all the people were starting the freak him out... just because he didn't know where to go and children everywhere wanted to pet the cute little dog... 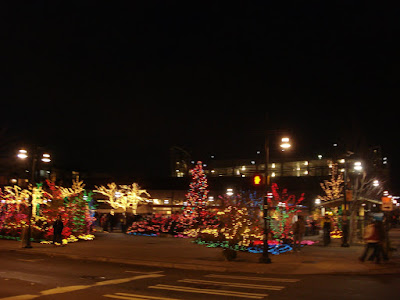 I found a few friends around the tree, and stood with them for the lighting, and somewhere there is even a picture to prove I wasn't alone, but it's on my friend's camera... I'm sure they will email it or something.

I walked over across the street from the main event to take this second picture here, where you can see half of the piazza. The other half has a dog area and some more lights on all the trees. 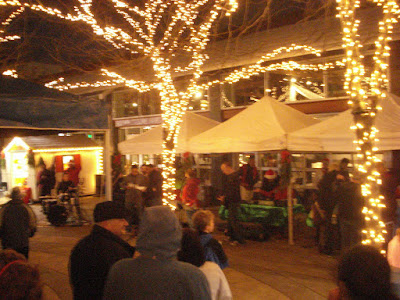 They also had a band in the center area that is probably still playing as I type.

Ther was also cider and girls walking  around promoting "The Nutcracker," which is currently being performed by The Evergreen City Ballet, which is a local dance school right here in Renton... actually it is right next to my building. 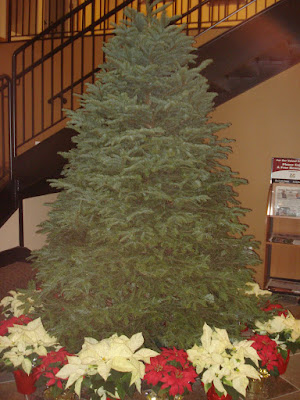 And also of note, my building has a real tree in the lobby.  They put it up today, and it is nice to see and smell.
I forgot the smell of having a real Christmas tree inside, but I think I like it the most because I don't have to clean up the mess from it.
I also thought the flowers were a nice touch too.
Anyway, that's the adventure from today... more to come soon!
Later,
SteveO