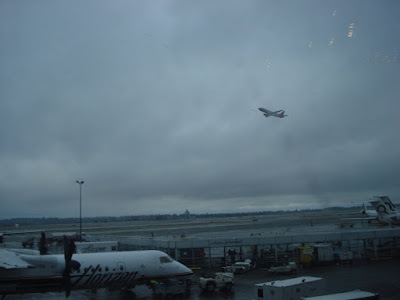 [12:18 PST 12/17/2008]
Well, everything was fine at the airport... they rushed me through the line to check my bag, and then escorted me through the security check point because I had Jaani, which was really nice.

I took this picture when I first got here, but I have to admit that I was disappointed that I have to wait until I get to Michigan because my starbucks trick doesn't work at the Airport hotspots. Apparently it only works for AT&T hotspots in Starbucks locations... not the hotspots in the airports.

So, now I am just typing this post with a text editor because I don't think posting one update to my blog is worth $7.99. I can update twitter from my cell phone though, so at least the microblogging thing works from the airport. so yea... now I'm just waiting for my plane, which is about 45 minutes late and counting... Technically we were supposed to start bording by now, but oh well... hopefully soon.

that's it for now... I'll post this once I land in Michigan.

[Insert Flight to Michigan and trip to the bar with my brother here...]

So, Now I'm all set up at my parents' house. I have the webcam pointing out the window of my bedroom, and motion is set to start a time lapse video at 7AM EST. I also believe that my posts will be in EST for the next two weeks, but the time stamp at the bottom of each post is in PST.

Anyway, it's 2AM here in Michigan, so I need some sleep.